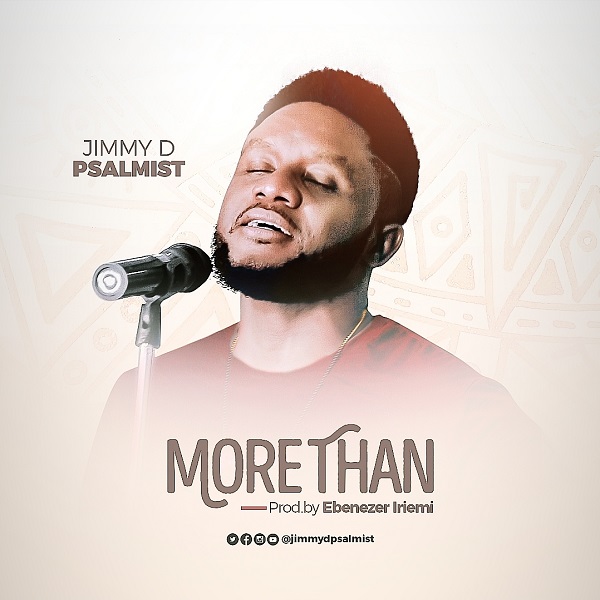 Followed by his recent enchanting tune, “I Need You”; “More Than” is another soul-lifting worship masterpiece by the ‘Indomitable’ crooner.

According to Jimmy D Psalmist: There’s absolutely no word formed by a man that can best describe God’s personality. We are limited and we only know to the extent that is revealed. If there’s a word bigger than what we have used before we certainly will run to it.

It doesn’t matter what you call HIM, how you see HIM, or who you think HE is to you. I submit to you that HE is far MORE THAN that — Jimmy D Psalmist

“More Than” is produced by Ebenezer Iriemi for Riems Studio and has its visuals directed by Abraham Daniel for Light Cinema.

Hey! This post couldn't be written any better! Reading through this post reminds me of my previous room mate! He always kept chatting about this. I will forward this page to him. Fairly certain he will have a good read. Thanks for sharing!
Reply

Thank you, I've just been searching for information approximately this topic for a long time and yours is the best I've found out so far. But, what concerning the conclusion? Are you positive in regards to the source?
Reply

This is a topic that is near to my heart... Best wishes! Where are your contact details though?
Reply

Generally I do not learn post on blogs, however I would like to say that this write-up very compelled me to check out and do it! Your writing style has been amazed me. Thanks, very great article.
Reply

I savor, lead to I discovered just what I was looking for. You have ended my 4 day long hunt! God Bless you man. Have a nice day. Bye
Reply